A tohu is a symbol or emblem designed to provide insight or guidance. 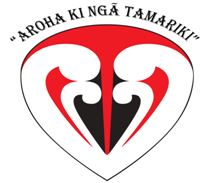 Love to all children

The tohu is based on the following Māori proverb.

He taonga rongonui, te aroha ki te tangata
Goodwill towards others is a precious gift

In addition, the tohu simple, uncomplicated; it could easily be carved as a manaia and worn as a taonga. It incorporates a Māori proverb relevant to the work of RTLB.

Ngā pākeke represent kaiako and ngā mātua who are embracing, teaching, and nurturing ngā tamariki. This is done under the umbrella of RTLB guidance (note the umbrella shape).

The tohu is purposely heart-shaped: children are at the heart of the RTLB service.

Note: This tohu was originally designed and gifted to the NZRTLB Association by Wharewera Koopu (Ngāti Awa, Whānau ā-Apanui). Contributors to the development of He Urunga Tū – An Entrance to Engagement opted for this design to be at the centre of the framework as it was designed specifically to reflect our RTLB practice.